It was the first of February 2012 when alameensoft© was announced to be the first national programing company obtaining the 3rd level of CMMI model, Version: CMMI-DEV v1.3.

And it was on Thursday 1/12/2011, that alameensoft had completed the final appraisal test for gaining CMMI ML3 certificate (Capability Maturity Module Integration – Maturity Level 3).
Final appraisal activities started early Saturday morning 26/11/2011, and was led by Eng. Ahmed Abd El-Aziz from the Egyptian Software Engineering Competence Center (SECC).
Within six days, meetings were held with most of the company staff, and all documents issued from projects were reviewed and checked. Consequently, the appraisal team reached to the conclusion that all of the programing department activities were adhering to CMMI Standards.
Despite the fact that the final appraisal was concluded at 1/12/2011, the result wasn’t announced. As the strict regulations of the Software Engineering Competence Center – the donor of the certificate – imposed that no information related with the final appraisal should be released before being credited by the center. Wherefore, the announcement was delayed.

alameensoft seizes this occasion to express its deep gratitude to everyone contributed in this success. 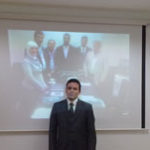 Mr. Ahmad Abd Al-Azia from the Appraisal Team in Egypt 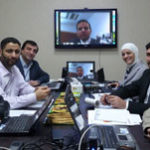 Part of the Appraisal Team During Their Work 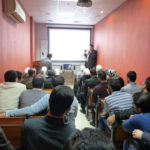 About the Author: Khaled AlSawaf

Login with your Social ID